The industrial revolution sparked great debate about management theory. It’s a key turning point in the history of management. These are six of the leading theories that appeared after this event.

Every country undergoes industrialisation. It occurred in the United Kingdom in the mid-19th century. British people who immigrated to Australia then brought their knowledge with them. This sparked a similar industrial revolution in Australia.

Why is this relevant to modern management?

The industrial revolution allowed companies to grow far larger than ever before. Management no longer involved overseeing a few dozen employees directly. Massive corporations with hundreds or thousands of employees sprouted up from this era. It’s a key turning point in the history of management that led to many of the theories that we use today.

The industrial revolution led to the creation of several different concepts of management. Many came about in the years that followed. Though these concepts evolve, they’re still relevant in the modern age.

Let’s dive into the history of management and look at six theories. These all form the basis of modern management theory. Frederick Winslow Taylor was one of the earliest proponents of management theory. A mechanical engineer, he authored The Principles of Scientific Management in 1909.

At its most basic, his theory proposed for the simplification of jobs. By keeping things simple, he argued, productivity would improve. He also argued that managers and employees must work together. This was a new idea in the history of management. In the early-20th century, most companies still operated like dictatorships. The manager assigned the work, and the employee did it.

This was especially the case in the factories that rose out of the industrial revolution. Managers had almost no contact with employees. Instead, they issued orders and expected employees to get on with the work. There was no standardisation or science behind it. This, Taylor argued, led to unproductive workers.

He espoused fair pay for a fair day’s work. This mantra focused on employee productivity. If one worker produced less than another, they did not deserve equal pay. Taylor argued for the creation of scientific methods. These would make production as efficient as possible. This gave more responsibility to employees. They all had the same methods available, so the less productive had nothing to hide behind.

Taylor also created four principles of management as part of his work. These are:

Some of these principles haven’t survived the test of time. The fourth, in particular, offers no way for employees to improve professionally. Yet, they do tackle common problems in the modern workplace. Most managers search for more efficient processes. Monitoring employee performance is a common practice. Still, these were different concepts of management than those practiced at the time.

Also active during the same time as Taylor was Henri Fayol. Having started his career at a French mining company at the age of 19, Fayol rose up the ranks. In time, he became the company’s director, managing over 1,000 people.

Henri Fayol went 10 better than Taylor when he published Administration Industrielle et Générale. He created 14 principles of management. However, most of these focused on the administrative side of management. We’ve covered his principles in depth on our blog.

Fayol developed his 14 principles while working in his directorship. As a result, they came from the direct experience of a man who had been there and done it all.

He argued that many managers didn’t interact well with their employees. In this, he agreed with Taylor. But Fayol’s principles focused less on science. Instead, he looked at how to create an efficient company structure.

He argued for employee specialisation and a focus on organisational interests. Fayol also believed that all employees should only have one direct manager.

Fayol’s book became one of the key leadership tools in the history of management. Even today, his 14 principles of management agree with most modern organisation’s aims. One of the earliest examples of evolution in the history of management, Max Weber built on Taylor’s theory. He argued for similar principles. Weber believed that all managers must build chains of command. He also argued for standardisation.

Weber and Taylor differed in a key area. Weber realised that Taylor’s scientific theory did not account for emotions. He argued that the rise of technology could lead to a toxic workplace culture. He differs from many management theorists because of this focus on the negatives. Too much change can affect morale.

With this last point, Weber touched on an important aspect of modern business. Hiring for fit, he believed, involved searching for employees with the correct skills.

We now know much more about hiring practices. Hiring based on skill alone does not account for a company’s culture. If a new employee’s personality does not fit your culture, they rarely succeed.

Despite their importance, the previous concepts of management didn’t account for people. Specifically, they all held firm that money was the main influencer of employee performance.

His study found that relationships work as a key motivator for employees. When working as part of a team, people become more productive. The improvement was so marked that it became known as “The Hawthorne Effect”.

Mayo’s work laid the foundations for the focus on teamwork that today’s management theories have. He was the first to prove that the right people in the right teams leads to higher productivity.

His work led to the founding of the Human Relations Management Theory. Other theorists adopted his research. They used it to look for ways to create high-performing teams. These efforts still had the same aims of previous theories. They aimed for greater efficiency and better results. But Mayo’s work emphasised the importance of the human factor.

As a result, the Hawthorne Studies are a major benchmark in the history of management. A biologist, Ludwig von Bertalanffy wasn’t a management theorist. In fact, his general theory related more to biology than management. Even so, his work in the 1940s proved instrumental in the history of management.

He argued that all systems are the sums of their parts. In biology, you can look at your own body for an example of this. Your organs, muscles, and bones all combine, along with everything else in your body, to make a whole. One organ or muscle on its own is not productive. But the right combination leads to an efficient body.

You may already see how this applies to management theory. Ludwig von Bertalanffy’s General System has relevance in the workplace too. Most organisations contain several departments. Each of these departments has people, all of whom have their own jobs. If one department doesn’t carry its weight, the organisation suffers. In some cases, even one person failing to do their job properly can have widespread ramifications.

Beyond this, he also argued that each element in a system reacts to its environment. Outside influences can affect how a system operates. You could argue that this relates to toxicity in the workplace. It also places an emphasis on how personal issues can affect an employee’s motivation levels.

Though a biological theory at first, general system theory applies to so much more. In fact, it’s at the root of many modern managerial theories.

In 1960, Douglas McGregor built on the teamwork-related ideas in the Hawthorne Studies. He published The Human Side of Enterprise to make his points. In that book, McGregor presents two types of management: Theory X and Theory Y. 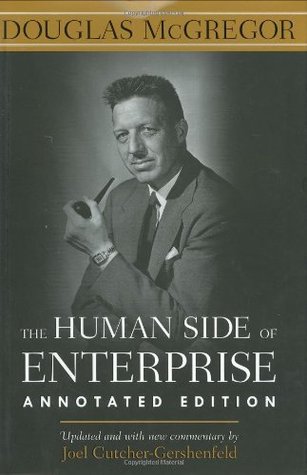 Theory X relates to authoritarianism. Such managers take a negative view of their employers. They assume their people have no motivation and won’t work well unless pushed. This leads to the leader taking too much control, often micromanaging projects. In such an organisation, productivity plays a huge role. If an employee doesn’t reach a certain “quota”, they don’t receive their rewards. It also assumes that employees have no ambition of their own. Theory X managers believe they must drag employees along to get results.

Theory Y built more directly from Mayo’s studies. Such managers take a much more positive approach to their people. They believe that teamwork leads to better results. Furthermore, Theory Y managers encourage professional development and give employees more responsibilities. They want to see initiative, which builds a positive workplace culture.

McGregor argued that Theory Y is the better choice of the two. Modern management bears his claims out as well. Though authoritarianism still exists, most don’t see it as the way to develop a healthy organisation. Theory Y forms the basis of most modern management theories.

Here are the key takeaways:

Register for our next webinar to learn more about engaging your employees.